David Crescenzi
began his studies at the Conservatory of Fermo, subsequently graduating in Piano,Instrumentation for Band, Choral Music and Choral Conducting at the Rossini Conservatoryof Pesaro.
For several years he was assistant and collaborator of Alessio Vlad, and a pupil ofGustav Khunn, of whom he attended the specialization courses at “I Pomeriggi Musicali”in Milan from 1993 to 1996. 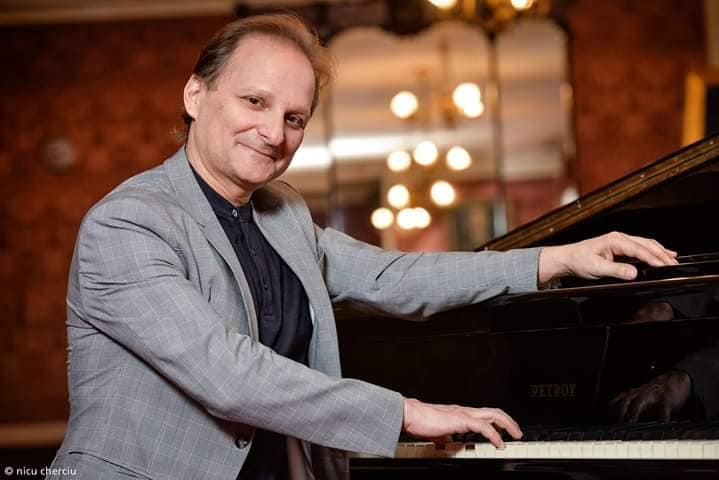 In his thirty-year career he has tried his hand as an accompanist pianist and Choir Master in various theaters and opera festivals, both in Italy and abroad, and currently as Conductor.
From 1999 to 2001 he was Altro-Choir Master at the “Carlo Felice” Theater in Genoa and in 2004-2005 at the San Carlo Theaterin Naples.
From 2006 to 2013 he directed the “Bellini” Choir of Ancona, taking part in the opera seasons of the theaters of Jesi, Ancona and the Arena Sferisterio di Macerata (conductors: Callegari, Mariotti, Arrivabeni, Bartoletti, Battistoni, Bertini, Santi,Elder or Tate, directors: Pizzi, Brockaus, Ferretti, Cavani, Ranieri, De Hana or Pier’Alli)
In 1998 he began an intense collaboration with the Cairo Opera House where in 2014 he was appointed Artistic and Music Director for opera and ballet, the collaboration ended in May 2020.
In August 2015 he directedAida on the occasionof the openingof the doubling of the SuezCanal(in front of more than 60 heads of state).
From 2002 to 2017 he was Music Director at the National Theater of Timisoara (Romania) where he conducted works by Puccini, Verdi, Bizet, Mascagni, Leoncavallo, Bellini, Cileaand Rossini.
From 2006 he began his collaboration with theNationalOpera of Bucarest(conducting Rigoletto,L’elisird’amore, Il Barbieredi Siviglia and the newproduction of Le Nozze di Figaro), and then he collaborated with the Budapest Opera, where heconducts almost the entireItalian repertoire.
Since January 2013 he has been Principal Guest Conductor at the Bucarest National Radio Orchestra. In the 2009/10 season he began his collaboration at the Opera of Cluj (Romania) with operas by Verdi and Puccini’s La Bohéme. At the Romanian Opera in Iasi he conducts operas byMozart,Rossini, Donizetti and Verdi.
In the 2008-2009 season he conducted Carmen at the Teatro della Fortuna in Fano, and Otelloatthe Bolshoi in Moscow.
In 2008 he inaugurated the Opera Season of the Sferisterio Opera Festival in Macerata, conducting Cleopatra by Lauro Rossi as a world premiere in the modern era,and in July 2013 agala evening dedicated to BeniaminoGigli.
In the summer of 2014, on the occasion of the 50th anniversary of the Arena, he conducted the “Golden Wedding” concert with the record participation of over 1,600 singers from all over the region.
He conducted the Bergische Symphoniker Orchestra on tour in Holland (Aida) and in Germany (Trovatore) and, in the 2011-2012 season of the Marchigiana Philharmonic, he conducted a series of concerts in Ancona, Pesaro, Fermo and Fabriano, with violinist Uto Ughi. On 2012 he was the conductor for the Solothurn Oper Air Festival of German- speaking Switzerland, while in 2014 he conducted Brahms and Beethoven with FORM, together with SerbianviolinistStefan Milenkovic.
On 2016 he directed Donizetti’s La Favorita (on Bucarest Radio), Il Barbiere di Siviglia (Locri Summer Festival), Traviata (Reggio Calabria), Tosca (Chieti), Attila di Verdi(Bucarest), L’Elisird’amore(Dussendorlf).On 2017 he will again be on Bucharest Radio with Verdi’s Simon Boccanegra,Traviata, Madame Butterfly;
Carmina Burana in the new season at theCairoOpera, and again in Dusseldorf in January andMarch with Puccini’s Turandot. On summer of 2017 he was a guest at the Taormina Opera Stars where he conducted Aida. Back in Dusseldorf for the 2017/18 season where he directs Le Nozze di Figaro,Madame Butterfly, Lucia di Lammermoor, Aida, the New Year’s concert, Tosca and a new production ofDonizetti’s Don Pasquale.
Since 1 September 2017 he is Artistic Director of the National Theater of Cluj- Napoca where during the season he directed Nabucco, Boheme, Otello, Elisir d’amore, Barbiere di Siviglia, Tosca and the new productions of Madame Butterfly, Don Giovanni andMacbeth. On March 2018 he conducted Aida in Cairo, in front of the pyramids in the Gizaplateau, a major international event after 20years. Invited to the StaatsOper in Hannover, on October 2018 he conducted Madame Butterfly for 6 performances. From the 2018/19 season he is Principal Guest Director at the Deutches Oper am Rheim in Dusseldorf / Duisburg where until now he hasdirected Tosca, Cavalleria Rusticana and Pagliacci, the new production of Romeo et Juliet by Gounod, Falstaff, Traviata, Aida, Cenerentola, DonPasquale, Lucia diLammermoor, Le Nozze di Figaro, Don Giovanni,la Figlia del Reggimento.